On January 18, the Commissioner for Admission to Professions published a first progress report as part of its investigation into the failure rate for the…

The Journal En Action for the Provincial Council on December 6, 7, 8 and 9 now available

“Over the last few weeks, some CISSS and CIUSSS managers have shown a willingness to lighten healthcare professionals’ excessive workload and alleviate their distress. But unfortunately, we have noticed that far too many institutions aren’t doing their duty. That is why we are protesting today outside of the office of the CEO of the CIUSSS du Nord-de-l’Île-de-Montréal. He doesn’t seem to grasp how urgent the situation is,” explained FIQ President Nancy Bédard. At the protest, which included several hundred healthcare professionals who are also members of the FIQ, Ms. Bédard was accompanied by Kathleen Bertrand, President of the CIUSSS du Nord-de-l’Île-de-Montréal.

“Here at the CIUSSS du Nord-de-l’île-de-Montréal, our efforts to solve excessive workload issues and overtime are advancing at a snail’s pace. As if by chance, since the CEO found out that we were going to hold a protest, we have seen a slight change in his attitude. That’s typical of this employer. We need to get into a tug of war with him over everything to see any progress at all. Our healthcare professionals are out of steam. The employer needs to be more open and use a more constructive approach,” said Kathleen Bertrand, President of the FIQ – SPS du Nord-de-l’Île-de-Montréal.

Pierre Gfeller, CEO of the CIUSS du Nord-de-l’Île-de-Montréal, called both presidents to a short meeting during the protest. “The voice of nurses, licensed practical nurses, respiratory therapists and clinical perfusionists will not be silenced. Any progress we are seeing now is thanks to the fact that healthcare professionals are mobilizing and that the public is showing support. May all the employers who refuse to cooperate consider themselves warned: we will not bend,” concluded Nancy Bédard. 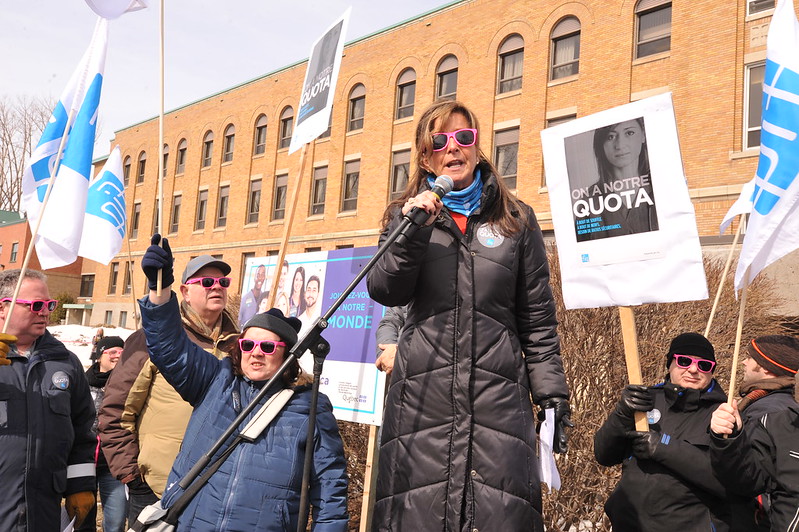