Retraite Québec: your digital Statement of Participation will soon be available online.

In March 2021, your 2019 Statement of Participation under a public-sector pension plan, such as RREGOP or the PPMP, will be uploaded to My Account…

Is wearing an N95 mask limited to health workers who work at a distance of less than two metres and for more than 15 minutes with COVID-19 patients?

If some employers are to be believed, one would think so. In fact, a lot of contradictory things are being said in the field about…

For 28 years, December 6 has been a day that is forever etched in our minds. It was on December 6, 1989, that 14 innocent women were murdered at the École Polytechnique.

Once again, the FIQ commemorated this day and participated in the various activities held in honour of these women.

The delegates in attendance at the Convention, held from November 27 to December 1, took a moment to remember the École Polytechnique victims.

A message from the Status of Women Sector vice-president

Shirley Dorismond, the new vice-president and joint-officer for the Status of Women Sector, spoke a few words to commemorate December 6, 1989.

Commemorations in Montreal and Quebec City

Union reps and employees participated in the commemorations held at the Place de l’Université-du-Québec in Quebec City and at the Place du 6-Décembre-1989 in Montreal. 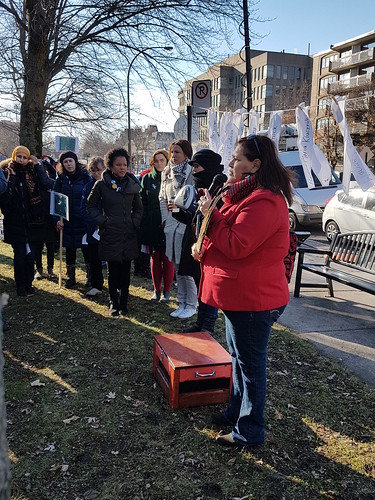